February 2004  wrote I  together with Wiegaarden / Tina Luther photograph and  Wiegaarden / Tine Luther article. From lion hunter to the family dog, the article was published in the Danish Kennel Klub magazine " HUNDEN " (DOG) The text is reproduced further down the page 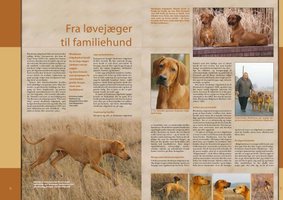 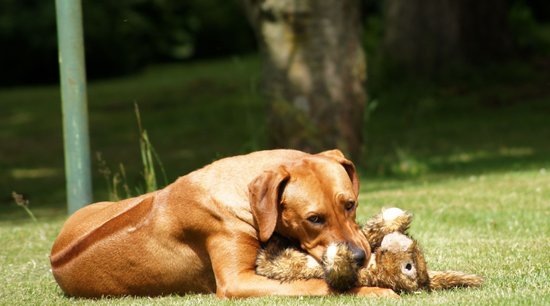 From Lion hunter to the family dog

The story of the Rhodesian Ridgeback started in the southern Africa. The Europeans, who came to Cape Town in 1650, met here the Hottentots. They called themselves and their dogs “Khoihoi”. In appearance they looked like a jackal but they had a "ridge"; a stripe of hair on the back. The hair is grooving in the opposite direction, just like today's Rhodesian Ridgebacks. The Khoihoi dogs were faithful, watchful and good hunting dogs, something the Europeans quickly learned to appreciate. Later the Khoihoi dog was breed with several European breeds. It is assumed that Greyhounds, Bulldogs, at that time a long legged dog, and the Pointer formed the basis for the upcoming breeding, which began in the twentieth century. Furthermore, we know that big game hunter Van Rooyen in his breeding program for "The Lion Dog"; also used Deerhound, Terrier and Collie.

The breed's first standard was established in 1920 and was called The Rhodesian Ridgeback..

The Europeans used the Rhodesian Ridgeback for multiple purposes. They were used for hunting; best known is probably the lion hunting, but they were also used for hunting other animals such as leopards, wild dogs, jackals, hyenas and baboons. During the hunting the dogs worked in a pack and tracked down the game by encircle it. By circling around the wild game and make a feint; the dogs keeps the game on the spot until the hunter arrives and shoots the game. This form of hunting required tremendous courage and perseverance of the dog, and it was very dangerous. It is certain that many dogs have been killed during this form of hunting.

Another of Rhodesian Ridgebacks important purpose was guarding. They are very good at guard the property and keep unwanted guests away; the Boers could be sure that their families were safe on the farms when their incorruptible Rhodesian Ridgeback was on guard.

There is no doubt that the Rhodesian Ridgeback is breed as an unusually tough breed. They had to live on minimal food and to work under extreme temperature. The terrain was rugged; it is stony and thorny - and all over enemies lurked in the terrain. First, there were the poisonous animals such as snakes, and also there were enemies like crocodiles lurking in the water holes. Only very attentive, independent, strong, robust, agile and tenacious dogs could survive in those rough conditions.

Many ways of applications

In Africa Rhodesian Ridgeback is still used as a hunting dog and it is often seen as a guard dog on the farms. The versatile breed has now been spread all over the world, and is used in many ways – from hunting wild boar and kangaroo to search for wounded  game and dog racing.

In Denmark, most Rhodesian Ridgebacks are family dogs, but some are also used for hunting, search for wounded game and agility.

The first Rhodesian Ridgeback came to Denmark from England in 1969, and since then the interest in the breed has been increasing. Over the last four years there have in average been registered 60 new dogs in Denmark.

The Rhodesian Ridgebacks temperament is marked by its past, in which only active dogs with the ability to act independently, also without its leader nearby, could survive. It is an independent and strong dog with strong pack instinct and strong protective instincts. It can by nature be reserved but never shy or aggressive.

We regularly see our ridgebacks are reserved with strangers, says Anne C. Dalsgård, who has had the breed for several years. - If I am out walking with the pack, and we meet someone, the dogs do not know, they turn their head away and ignore the person as if they are almost insulted. When they have learned to know the people, they want to talk, but they are generally not "pet dogs" they are never overbearing. They prefer to be near their people but have only a little need for physical contact. Thus they love to live close to their family, and they follow any of their people where they are going. The more a Ridgeback is with his family, the more balanced it becomes.

The Ridgeback is a very quiet dog who only bark if something unusual happens, said Anne C. Dalsgård. - It is very attentive, and will alert you if something going on. Therefore, we are always alerted when our dogs starts barking. For example, I woke up one night by their barking. I got up but could not see anything was wrong. Later we found out that one of our horses in the stable was ill. It was laying down on the floor in the box and kicked the walls. The unusual sound of horse's hooves on the wall had alarmed the dogs, who discovered that something was wrong. – The Ridgeback protective instincts are very strong, but it can be very difficult to see. - I have a very good example of a friend. One day, she slept in the middle of the day; she was woke up by a male acquaintance who had walked into the bedroom where she was without her Ridgeback had responded at all, so it was mocked of the lack of his guarding skills. In fact the dog was familiar with the man; why it did not respond.

Later my friend and her Ridgeback was on a train platform late in the night.There were no other people on the platform - she thought. Suddenly the dog ferociously turned; growling and showing his teeth. My friend turned and saw a man quickly running away.

I have often been heard guests saying "Is this a watchdog?". If we do not have detected that someone is knocking on the door, they only give a single yelp, but if we accept the guests, the dogs do not give a sound. I think it is fascinating that they are so good to distinguish between whether something is dangerous or not. The Ridgeback will always accept children. Many years ago I had even a Ridgeback, who was protecting, but it allowed always all the children to enter our house but adults could not just enter our house.

It is not necessary to train Ridgebacks guarding qualities. It is deeply rooted in its nature; by intensive training you only risk to develop very guarding dog which is more for trouble than for joy.

If you want to have a Rhodesian Ridgeback, it is important to be realistic about the breed, says Anne C. Dalsgård

A breed with such a background is a very independent dog. You do not get as quick response from the Ridgeback as from for example from a German shepherd. We are dealing with a strong and independent dog, which in my opinion is not happy with too many rules.

Things like intensive obedience training are the opposite of the purpose to the breed. The Rhodesian Ridgeback is breed to independently tackle situations. Of course they can easily learn normal things such as “to come”, “to stay”, “stop begging” and “jumping into the furniture”. I do not think that the Rhodesian Ridgeback is so difficult to bring up; it requires consistency and they must be treated with dignity. For tough upbringing of the Ridgeback will only result in they will not bother listening to what you say. If you have too many rules with your Ridgeback; you are going to struggle with it every day.

In my experience it is best with relatively few rules and lots of presence you will achieve mutual respect with the Ridgeback and you have an easy, sociable and affectionate dog.

Due to the breeds background it is also very important to ensure that it is socialized properly as early as possible. Of course conditions of life are totally different than if it has to be lion hunter in Africa. It makes a big difference that we breed the Rhodesian Ridgeback to be a family dog, yet I think compared to the other dogs I have had that you should be more focused of socialization.

A Ridgeback must exercise every day - preferably on a long walk. It should also be able to run freely - at least in a large garden, to drain the Ridgeback for energy.

As with all dogs, they also have to use their brain - blood track are very good training. Although it is a hunting dog, we have never had problems with our dogs would wander around. It is our experience they are in line with other animals. We had a RhodeaianRidgeback who walked together with a rabbit, and it never tried to chase it.

Postscript: This was written in 2004, it was the knowledge / experience and the information I had at the time about the breed. Therefore following. Corrections / additions to the above. The first Rhodesian Ridgeback was in Denmark around 1966. I do not see today that the breed has the same aloofness as before, and the Rhodesian Ridgeback generalt has become easier to work with and more "pet dog"and the need for physics contact with people has increased . Back in 60'-70'-80'-up in the middle of 90' there were big problems with health and temperment, either they were very shy, some even fear biting or they were very agresive. There we have come really far breeding purposes around the world, such that today we rarely see and experience some of the problems.