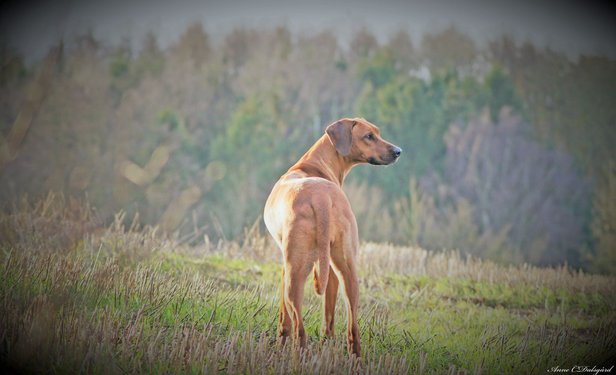 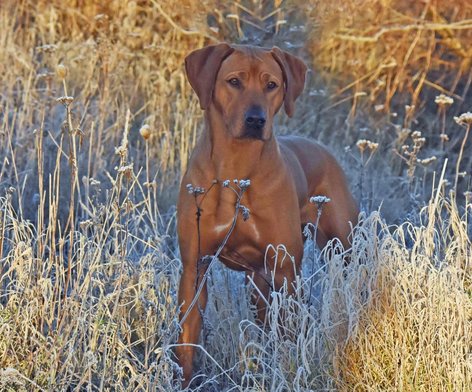 All the names that stand in the left column can at present time only be read in English.

Our Rhodesian Ridgebacks; each, have their own story that could be told and all have been equally loved by the whole family.

Panga has among other things rescued ours, then 3 year old son and showed skill as a sheepdog!!. Panga was an incorruptible guard dog, only children could come and go without getting a detailed "inspection". Unfortunately he suffered of a skin disease and was at times too much "guard dog" He was big, many at that time was big. His size was 72 cm. high and 54 kg. (Panga was out of African / English breeding)

"Jonas" was the gentle, he did everything so everyone should feel good and was very attached to me. If I for example was too late to come home; he always lay at the entrance waiting for me. Everyone could always see in which direction I was driven by a looking at him. "Jonas" accepted by all, he did everything you told him if only it was said in a friendly tone. He was a really lovely Rhodesian Ridgeback. (Jonas was an import from Africa)

Tamani ...... she was a chapter to herself and she was a real escape Queen. She always found a way out, by the window; by doors she could open etc. Fortunately she always ran over to the neighbour. Here she also opened the doors and entered into their house. It was not always a nice job to get her home especially if it was raining and she ran across the fields and towards a nice set table where the guests have set down for to enjoy a good dinner. We had the world's kindest neighbours who always took this nicely and always welcommed Tamani. Sometimes she even walk with my oldest sons rabbit, yes - people was looking when  the two came walking and jumping together. (Tamani was out of an English line)

At the bottom of the page you can see some pictures of the abovementioned Ridgebacks.

Much more could be narrated and more that could be mentioned, maybe another time.

So many years with Rhodesian Ridgebacks, has given me and my family and some unforgettable moments; although the breed may well require a lot of us, I would not have missed any of it. Let this end my story and hope that all Rhodesian Ridgebacks must come to families who want to understand this breed and provide it with the challenges, exercise, care, common sense, etc., as this breed and any other breed need to get a proper dog's life.

Below you can find some pictures of our very first Rhodesian Ridgeback, the quality is marked by the ravages of time and before digital pictures was made. As I have scanned some old pictures; "new" will be set at the gallery.