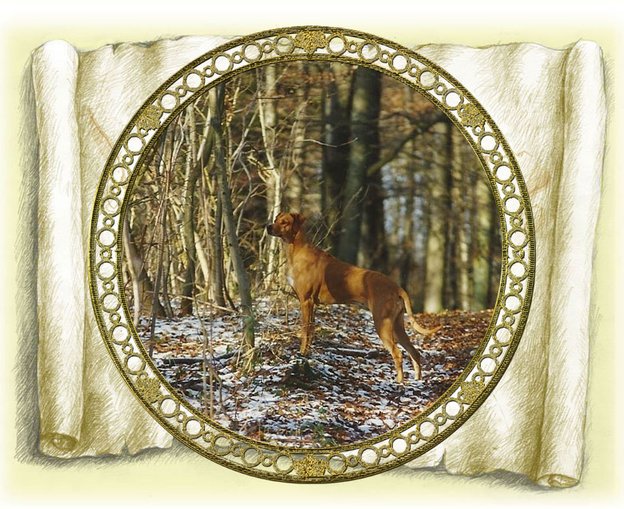 Queenie  was "the perfect lady", in every way, in that she was the very

essence of good behaviour and sweetness.

with her breeder; Mrs. Dudley Hackney. This, so she could aviod changing

planes on the way. With such a loving and caring start in life, Queenie was

well equipped to start her new life in "the unknown". She was born

well-behaved, I have never owned a Rhodesian Ridgeback so easy to get along

with. I would like to take the credit for that, but it wouldn´t be the truth,

it was just the way Queenie was.

Queenie was healthy and sound, and she was a very good mother to her

puppies. Running free in the open, she was our "African Gazelle", with the

same grace,easiness and agility. She could  jump right up in the air, to remain

"hanging" there. This I have only seen one more R.R. do, an African bitch

named Chipo, who thaught us the great importance of height and weight in a R.R.

Queenie came from a  litter of 12, none DS, all with show qualty ridges.

dog," we had a very special relationship. I still miss her so much !

Queenie was only  entered in conformation a few times, partly because

she doesn´t like it very much, but also because it was hard to get good

placements. When shown, she often competed against bitches much heavier in

body, with colours not at all like Queenie's warm, golden wheaten tone, which

was seldom seen here in Denmark at that time and still is.

Queenie got only one litter but what a litter! 7 puppies, 6 bitches and

1 male, one with one crown, no DS or kink tails . From this litter came DK.CH.NL.Club

I want to thank mrs Dudley Hackney , you is became one of mine dearste friend , you have a great knowledge to our breed  and you have always be willing to help , thank you Dudley.

Queenie was my  foundation-bitch, the very best I could ever wish for, that´s why my Kennel

It was with great sadness I received the message about Dudley dead.

Not only did I lost a very dear friend, our breed lost one the best too .