One of the most the famous Rhodesian Ridgeback who have been in Europe, was  Kwetu´s Xoxa in Denmark and have giving us so many good memories, we still miss him 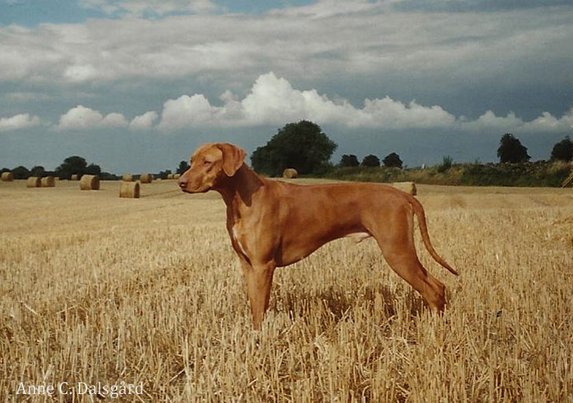 The story about a very special dog

I decided in 1990 that our next Rhodesian Ridgeback should come from the USA. At the same time I also wanted to get a brownnosed, because we havn´t seen any of them "live", and we thought it was important to show in Denmark, that this is a part of the standard. And then I started looking for the breeder and found that Kwetu, who needs no further introduction for most Rhodesian Ridgeback people, was the right place. We waited for about two years for the Rhodesian Ridgeback, who was later one of the most mentioned in Europe, to be born. Kwetu´s Xoxa in Denmark was the name given to the smal beautiful brownnosed male. The name that means "Kwetu tells a story in Denmark", it proved to be the right name.

"Xoxa" who was the first Kwetu dog outside USA, created so much excitement in the common Rhodesian Ridgeback circles in Europe. The interest for among other things the brownnosed dogs was awoken. I guess that you can say that up until then, all to many people in Europe (and unfortunately also elsewhere) thought that the brownnosed was a "second rate" dog, that was hoped to dissappear. I have been very surprised to meet a lot of Rhodesian Ridgeback owners (primarily exhibitors) who didn´t know that the brownnosed was a part of the standard. I can relate to the fact that some people think the blacknosed is the most beautiful. But I can not relate to those who just say that the brownnosed looks wrong, and that they don´t like them. I personally think that a Rhodesian Ridgeback who looks like the standard prescribes, always is a wonderful sight. No matter what colour their eyes and noses may have.

Xoxa  he followed the course set out for the brownosed and today you can meet a brownosed to nearly every show. Unfortunately it looks to me, like  the brownosed are be a whim of fashion . You always have to remeber , a good brownosed is not only a good brownosed because of the color at "the nose", but  only if the whole dog is bred to the standard.

"Xoxa" was the first brownnosed, the first American and the first line bred Rhodesian Ridgeback in Denmark. He was in maximum standard size, strongly and muscularly built, but still 7-10 kg. below the normal shoe picture of a male, and these things meant that he was never recognized in his new homeland, because he looked "strange". But outside Denmark the interest was big for this "strange" Rhodesian Ridgeback, but  "Xoxa" kept on winning. Xoxa was a very beautiful Rhodesian Ridgeback with movement, I not at this time , have seen before.

"Xoxa" became the first brownnosed champion in Denmark, and shortly before his untimely death, he won the prestigious Swedish special in 1997. In competition with 155 other Rhodesian Ridgebacks. Xoxa  became  the first brownnosed who won the Swedish Special. The judge was the well respected English specialjudge Mr Jack Selby, who put his opinion of "Xoxa" like this: "My best in show, was the well balanced, free moving Kwetu´s Xoxa in Denmark, an American import, the best brownnosed dog I have ever had the privilege to judge".

As winner of this show "Xoxa" at the same time became Swedish champion.

The following year the Swedish special BOS was won by "Xoxa´s" daugther "Fanny" .Owned and breed by Niklas Sandberg, Sweden. Winner of the Netherland special 2000 was also a daughter from Xoxa, my own Copper Queen AuxesiaBy Xoxa. Number one at the Golddog list 2000 in Norway, was a son from Xoxa, Copper Queens Aretos, best obedience dog at the Swedish Specalty 2002, was Monnomotapa´s Kevin, a son after Xoxa and full brother to Fanny..........and the list could  go on and on. "Xoxa" lives on in his offspring, and also in that field he has shown his skills. Many of his offspring has gone very far in both the showrooms, as obedience dogs, rescue dogs and sweissdogs.

To Barbara and Art, thank you so much for giving me one of the best ! I also will thank you both, for all the good times, we have spend together. It have been a honour to have your as guest, see Barbara judge Rhodesian Ridgeback  in Denmark and at the Swedish Specialty and meet you both to the World congress in 2000 in Netherland . Hope we meet Again.

Xoxa was a quiet dog, gently towards all  that he loves.The best thing he knows, was to go a bloodtrack and I´m sure he could have been a 1.class sweissdog. One of the best picture in my head is watching him on the field.

But how about the animals

Or need I only ask

The answer comes back